FORGET the days when lettuce consisted of a few limp green leaves at the side of the plate. Down in Kenmare, organic farmer Billy Clifford of Whitethorn Farm is serving up eight different varieties of salad for a customer base which includes two of the county’s most exclusive hotels.

Among the varieties of greens grown on the farm at Killowen is the exotic-sounding Japanese mizuna. Herbs such as basil, coriander and parsley are produced in lavish quantities also for the town’s restaurants.

A UCC arts graduate, Billy originally began to experiment with self-sufficiency on the home farm. About eight or nine years ago, he went totally over to organic methods and began to offer vegetables for sale.

He now uses one and a half acres intensively for vegetables and raises some suckler cows. Ever before organic farming became popular, his interest in the concept grew out of a general concern for the environment and theway farming was going.

By the time he came to grow vegetables commercially, he had already eliminated fertilisers completely from the farm. One of his very first customers was local restaurateur Maura Foley, then based at the Lime Treeand now running the equally successful Packie’s of Henry Street in Kenmare.

The Kenmare wholefood shop, The Pantry, was one of his significant customersin the early days also and still continues to be. The `big names’ on his customer list include Sheen Falls Hotel and the Kenmare Park Hotel along with other top Kenmare restaurants.

Everything is propagated in polythenetunnels on the farm and the crops include early potatoes, carrots, lettuce andherbs. Courgettes, cucumber, cherry tomatoes and basil are also grown inthe tunnels.

“Half of the outside area is under lettuce,’’ Billy said. “Anything we’reasked for we’ll grow.’’

Some of the more exotic varieties grown at Whitethorn Farm have included cantalopes and cape gooseberries though Billy jokes that he doesn’t want to be asked for thegooseberries again.

Acres of lettuce conjures up visions of a snail’s paradise, especially since slug pellets are banned. How does he keep the slugs at bay?

Having written at length about the topic in a specialist magazine, Billy hesitates at the thought of being long-winded. He explained that outdoors the margins are strimmed tightly while the tunnelsare `patrolled’ between 10pm and midnight to hand-pick the slugs.

Billy supplies both Brook Lane Hotel and No.35 with fresh organic produce. At No35, We believe in supporting local producers. Billy’s farm is located outside Kenmare. This reduces the travel time of the vegetable and ensures that they are always fresh.

Billy is a member of the Irish Organic Farmers and Growers’ Association. He is helped in the business by his wife, Wilhelmina, his son, Robin, andhis sister, Catherine.

Wilhelmina grew a lot of dried flowers at one stage but the market becamesaturated.

The market for organic vegetablesis growing in Kenmare in response to the customer base createdby the quality hotels and restaurants and the cosmopolitan population the town and the surrounding area.

“The demand is growing all the time,’’ Billy said. “Another guy started doing salads the year before last. There are two of us at it now.’’

The Cliffords are practically self-sufficient from a food point of view because as well as growing their own vegetables, they kill their own cattle. 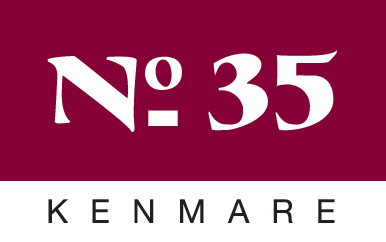