Valentia Island crowned by Geokaun Mountain, Valentia Island (Oileán Dairbhre) is an altogether homier isle than the brooding Skelligs to the southwest. Like the Skellig Ring it leads to, Valentia is an essential, coach-free detour from the Ring of Kerry, with some lonely ruins worth exploring.

Prior to the laying of the Transatlantic Cable it took approximately two weeks from a message to reach North America from Europe… weather permitting as all communications were sent via boat.

The idea of a transatlantic cable was first proposed in 1845, but the distances and depths presented formidable problems. In 1856 the Atlantic Telegraph Company was registered with a capital of £350,000 (then about $1,400,000). On the American side Cyrus W. Field was the driving force; on the British side it was Charles Bright and brothers John and Jacob Brett.

The First Cable
The manufacture of the cable started in early 1857 and was completed in June. Before the end of July it was stowed on the American Niagara and the British Agamemnon — both naval vessels lent by their respective governments for the task. They started at Valentia Harbour in Ireland on 5 August. For the first few days, everything went well but six days later, due to a mistake made with the brake which limited the rate of descent, the cable snapped. Just 380 miles had been laid.

The ships were forced to return to port. An extra 700 miles of cable was made for the second attempt which began on 25 June 1858. This time the same two ships met each other in mid-Atlantic where they joined their respective ends. The cable broke almost immediately. Again the two ships made another splice: this time they managed 40 miles before it broke again. The fourth time they had laid 146 miles before the cable was lost yet again. It was clear that this was not going to be easy! The two ships returned to Ireland but it was decided that, despite the loss of a considerable amount of cable, they still had enough for a further attempt. On 29 July they made their fifth attempt, again starting from the mid-point. This time it worked! On 5 August 1858 both ships reached their destinations – Valentia Harbour in Ireland and Trinity Bay in Newfoundland. The two continents were joined.

On 16 August communication was established with the message “Glory to God in the highest, and on earth, peace, good will to men.” Unfortunately the engineer in charge, Wildman Whitehouse, started by applying very high voltages rather than the very weak currents that had been tested during the cable laying. Within three weeks the damage inflicted on the cable by the high voltages was becoming apparent and it ceased to work.

The Second Cable
It took several years before another attempt was made. This time a single ship was chartered, the enormous Great Eastern, by far the largest ship of its day. She started from Valencia at the end of July 1865 and succeeded in laying 1,200 miles before the cable snapped. Several attempts were made to retrieve the broken end but they all failed.

Third Time Lucky
After so many failed attempts, the final, successful, cable was laid with virtually no problems. On 27 July 1866, the cable was pulled ashore at a tiny fishing village in Newfoundland known by the charming name of Heart’s Content. The distance was 1686 nautical miles Valentia Island. The Great Eastern had averaged 120 miles a day while paying out the cable. The first message sent on this, finally successful, cable was: “A treaty of peace has been signed between Austria and Prussia”. Queen Victoria, then at Osborne, in the Isle of Wight, sent a message to the President of the United States. “The Queen congratulates the President on the successful completion of an undertaking which she hopes may serve as an additional bond of Union between the United States and England.”

Almost immediately, the cable opened for business but only the very wealthy could afford it – the initial rates were a startling $1 a letter, payable in gold – at a time that a monthly wage for a labourer might be $20.

It is interesting to note that even though later cables could carry large numbers of signals at the same time, it was not until the 1960s that the first communication satellites offered a serious alternative to the cable when in 1966 the Transatlantic Cable Station closed its doors for the last time. 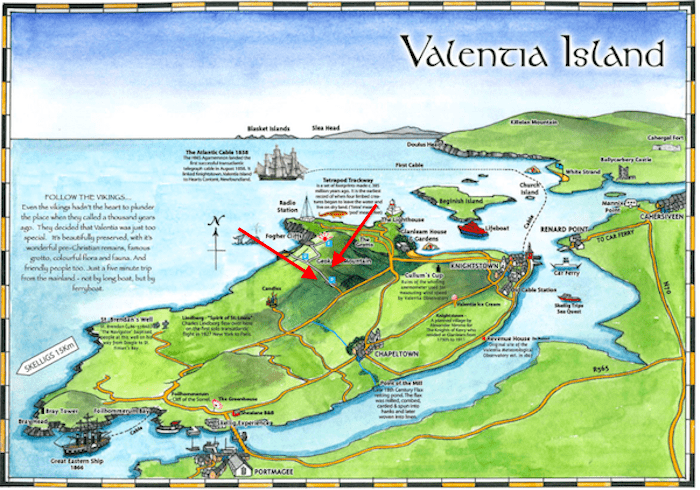 and visit no35 kenmare restaurant   https://www.no35kenmare.com